Your phone is experiencing some unusual heat. It may be a sign that something’s wrong with it, or maybe your battery charger isn’t working properly and the device has become too hot to use. Whatever the case may be, there are easy ways of checking if your phone is overheating without having to send it in for repair or buying a new one!

Overheating is a common problem. There are many reasons for a phone to overheat and there are easy fixes to cool down your phone. 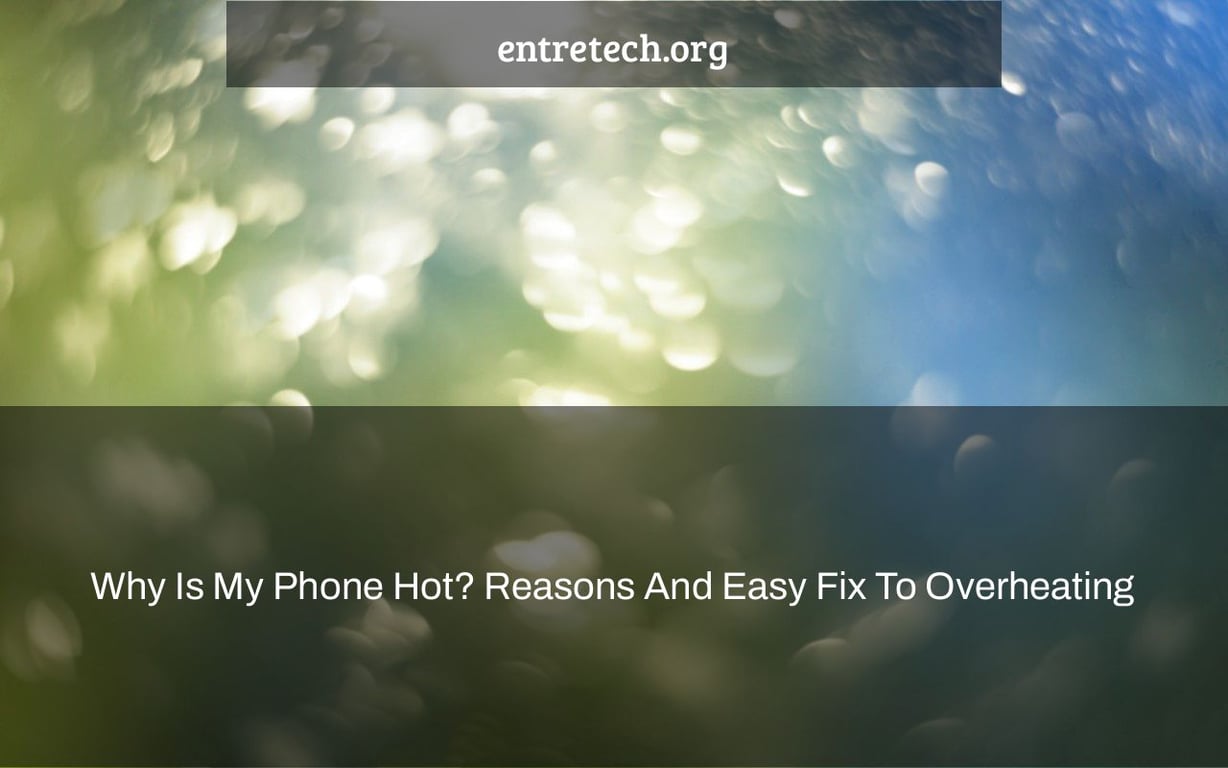 Have you noticed that your phone seems to be becoming hotter and hotter for no apparent reason? There are a multitude of reasons for an overheated phone, however the following are the most typical ones:

Each of these causes of a heated phone has a simple solution. 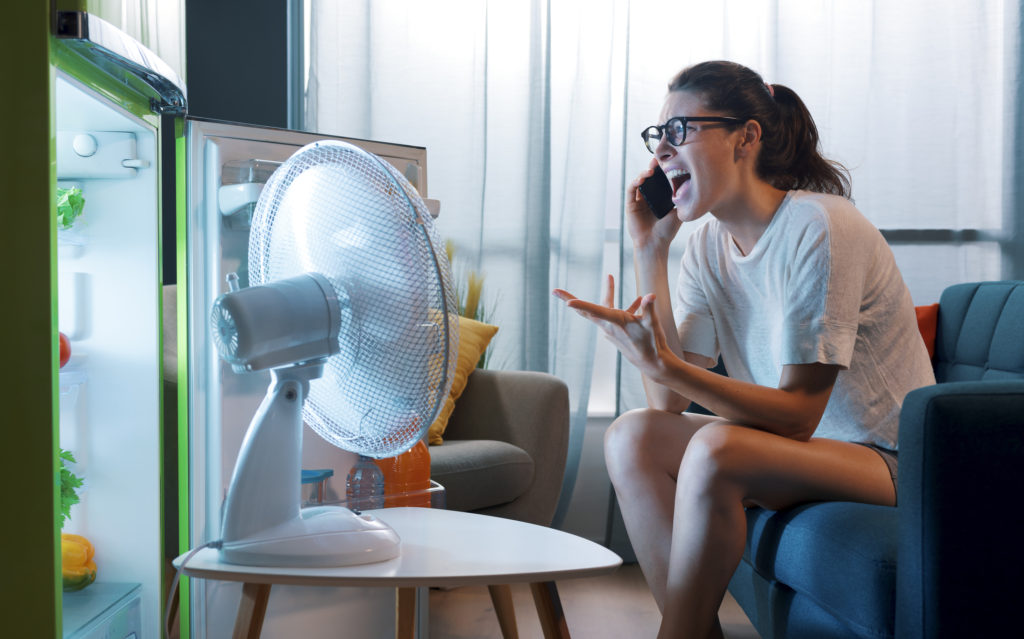 It’s Too Hot Out There

The most prevalent concern for consumers is the ambient temperature where they are using their gadget.

When you’re outdoors, the light and air temperature contribute to the heat generated by your phone, which is particularly noticeable during the summer. This extra heat has an impact on your device’s performance and may cause it to overheat.

If you sleep with your phone in your bed or under your pillow, you insulate it and add your body heat to the equation.

It’s simple to change the surroundings around your smartphone.

Neil deGrasse Tyson discusses why he doesn’t wear a phone cover on the Joe Rogan Experience. Here’s a clip from the video.

It’s likely that you just saw this video on your smartphone. If that’s the case, the time your screen was on and the processing power necessary to produce or draw the video on the screen caused your phone to become a bit warm.

Apps with a lot of screen time and processing requirements

Some applications will keep your phone’s display on for an extended period of time.

Some applications put greater strain on your phone’s CPU than others.

Some applications are capable of doing both.

Tasks That Require the Use of a Computer

The display on your smartphone is both a power drainer and a heat generator. Heat is produced by using applications and completing chores that keep it lighted.

Aaron Carroll and Gernot Heiser of the University of New South Wales recorded the power consumption of different components in ordinary smartphone workloads in their article, Analysis of Power Consumption in a Smartphone. 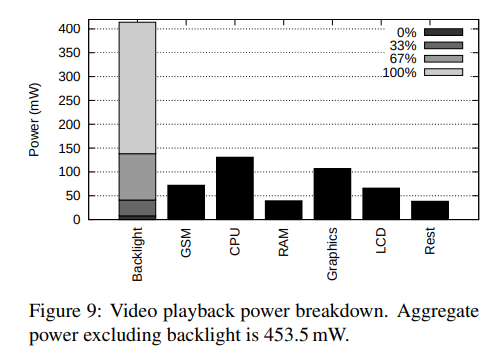 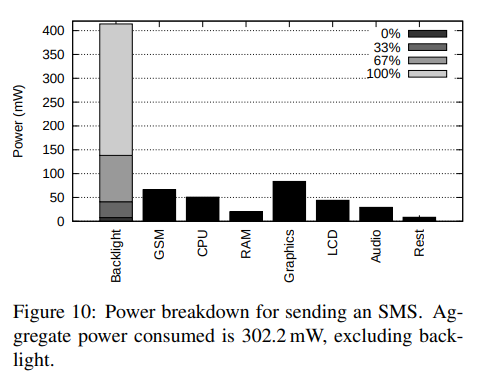 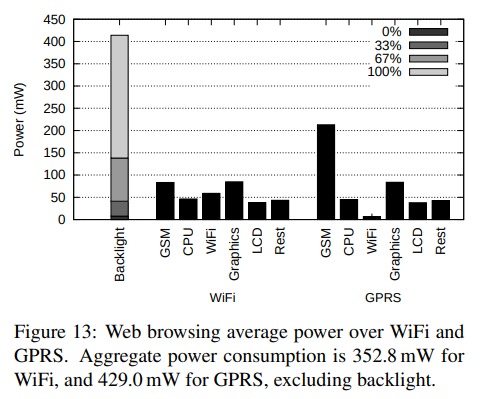 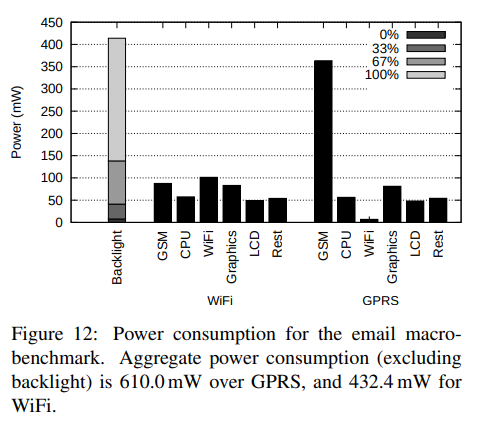 The simplest option is to put your phone in a suspended mode (sleep; display off) or perhaps turn it off completely till it cools down.

Lowering the screen brightness, on the other hand, will make the device less heated. As you boost the brightness, you’ll notice that the power usage skyrockets. 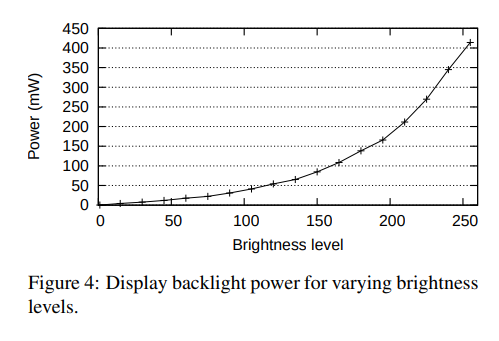 Display that is up to date At lower brightness levels or when showing dark colors, OLED screens are very efficient. However, this is just a small component of what causes a phone to heat up.

Tasks that need a lot of processing

A multitude of processors in your smartphone work together to make it a terrific multitasking tool.

While basic actions like as texting and emailing need less processing, some applications necessitate the usage of a high-end CPU, which uses more power. This level of performance comes at the expense of excessive heat production, which raises the temperature of the phone.

The tasks that need the greatest processing power on a mobile phone are listed below.

To tackle these heat-producing processes, there are a few simple fixes:

Take notice of the power usage for a basic cellular audio call in the aforementioned Carroll and Heiser research. Smartphones, at the very least, perform their principal job with little power consumption and heat emission. 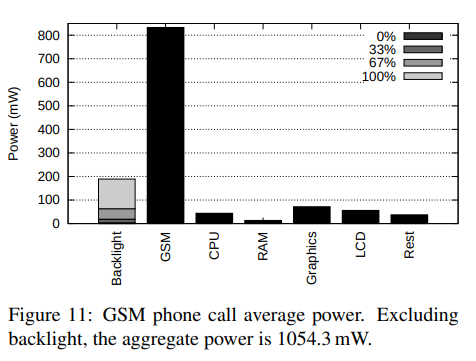 People often believe that charging their phone more often would extend its battery life, however this is not the case. Overcharging your battery might shorten its life by generating too much heat.

I wrote about how to extend the life of your smartphone battery and found the best manufacturers here.

If you want to safeguard your battery as much as possible, avoid charging it when it’s hot or in a heated environment. In fact, once the power level reaches 80 percent, turn off the charger to limit the amount of time it’s plugged in and creating heat.

It is preferable to charge many times during the day. During charging cycles, the heat generated is permitted to evaporate. People hate running out of battery power, but it’s worth it to keep your smartphone cool. Most of us are within walking distance of a charging station:

Aim to maintain your battery between 80 and 20% charged, then charge it to roughly 40% and remove it from the charger when it reaches 80 percent.

There are even applications that allow you to customize your alerts. I use BatteryBot Pro (F-Droid | Google Play), which can track your phone’s battery life and temperature.

If you’re not near a power source, switch off everything that isn’t absolutely required. WIFI, Bluetooth, and GPS are all included. These services may use a lot of battery power and generate heat.

A Great Deal of Data Is Being Transmitted

Another source of heat, although to a smaller amount, is data transmission and reception. The three major radios on current smartphones are cellular, WiFi, and Bluetooth. While their power consumption isn’t as high, when combined, they may lead to increased smartphone temperatures.

The University of Zagreb’s Goran Kalic, Iva Bojic, and Mario Kusek compared the battery consumption of these three communication radios. The researchers quantified and compared the links in their article, Energy Consumption in Android Phones while Using Wireless Communication Technologies. 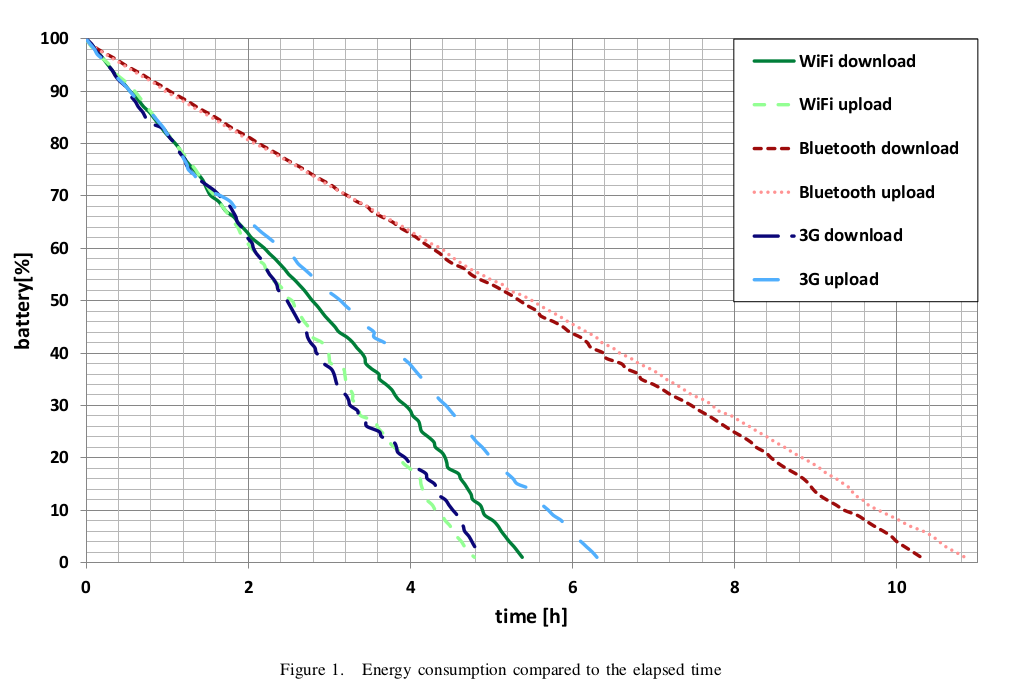 The interior temperature of current mobile phones is influenced by background location services provided by a GPS radio and newer, quicker cellular radios for 4G and 5G.

If your phone is becoming hot, here are a few things to think about:

This not only keeps your phone cool, but it also protects your privacy by blocking WiFi and Bluetooth beacon monitoring.

The fact that these radios are available online is not the major issue. When they’re in use, they utilize a lot of energy and produce a lot of heat. While they’re operating in the background, apps might send unwanted data across WiFi, LTE, and Bluetooth. 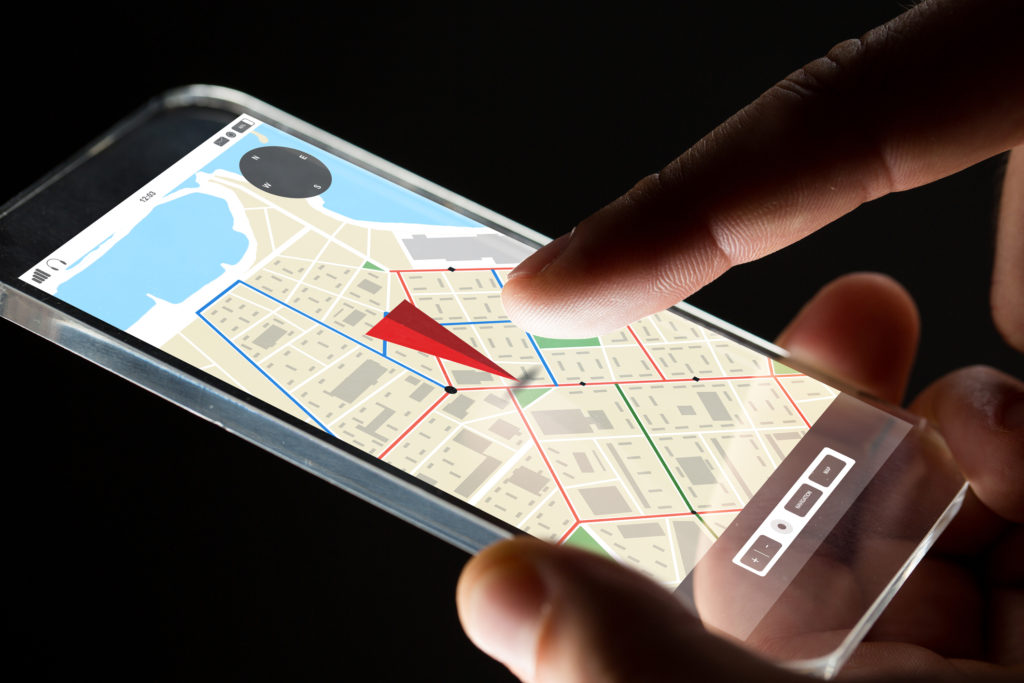 Many applications operate in the background of mobile devices in addition to system operations.

This may happen with applications that share your location, social networking apps, or the most recent shopping or travel offer apps. Even when the program is not in use, these background functions waste battery by requiring CPU cycles and, in certain cases, audio/visual output.

Background applications are usually limited in how much processing and data transfer they are permitted by mobile operating systems. Both an Android phone and an iOS device allow users to limit how much background activity an app is allowed via options such as “Battery Optimization.”

Even with restrictions, certain programs, like as streaming or A/V playback, have greater flexibility. Excess heat is produced as a result of multitasking.

The simplest strategy to get rid of unnecessary background services is to reduce the amount of programs you have installed. I propose going through your app list and asking yourself the following question:

Is it really worth 5% of my battery today?

I’m aware that this is pretty Marie Kondo-esque. However, if you don’t use an app at least once a week, you’ll gain weight.

If you require an app later, remember that you can always reinstall it.

Apps that are outdated, poorly written, loaded from the side, and have been hacked

Apps aren’t all made equal.

Some smartphone applications are poorly developed or have the potential to become outdated. This poor coding or extra processing depletes your battery and may cause your phone to overheat.

As indicated in the last section, being a digital minimalist in terms of app count might lessen the likelihood of rogue programs causing issues. Make sure the rest of your applications, as well as your Android and iOS operating systems, are up to current.

Only install programs from approved and well-known app shops if you use them often. The safest option is to download software from the Google Play Store or the Apple App Store. F-Droid and Aurora marketplaces have been thoroughly reviewed for the tech-savvy and privacy-conscious.

Please do not download an app’s premium or paid version from dubious download sites. These applications have a greater chance of being hacked. Installing these rogue versions on your smartphone, which contains sensitive and private data, is a certain way to have your data stolen. In addition to jeopardizing your digital existence, these stolen applications aren’t updated via an app store, which might cause your phone to overheat.

Finding methods to install a cryptojacker program on mobile devices, even from legitimate app stores, is a recurring issue. The purpose of these applications is to mine bitcoin without the user’s awareness. 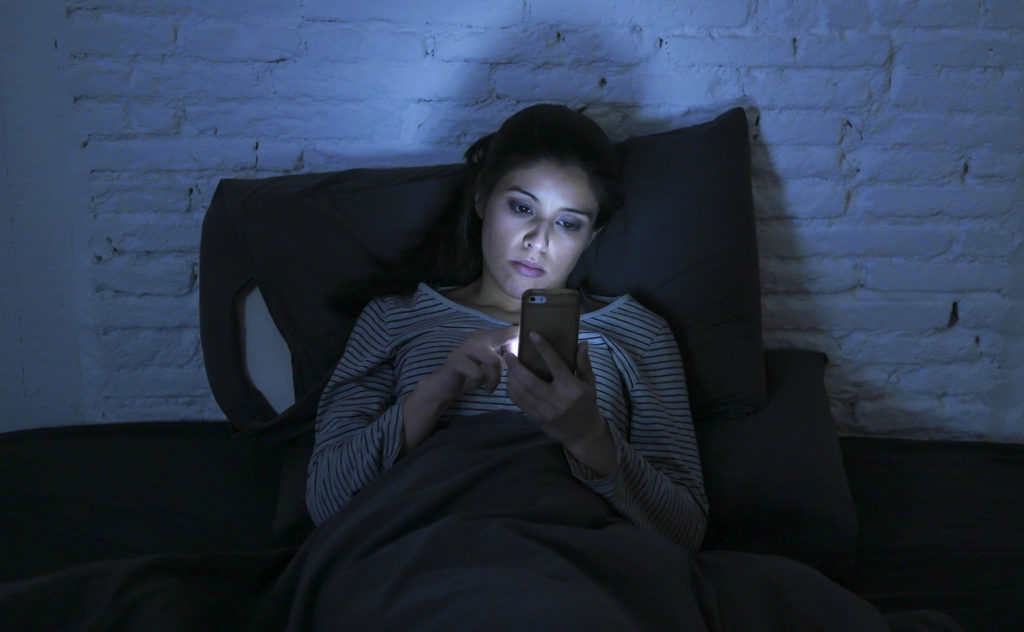 Too much time spent on the phone

Smartphones have evolved into a game-changing piece of technology that will be used by 7.5 billion people globally by 2026. However, there are certain drawbacks to this vital equipment.

Many individuals use their electronic gadgets in excess of what is considered “healthy.” You’re badly harming sleep, focus, posture, and maybe a number of other yet-to-be-identified elements of your health while draining your battery and heating your phone.

Some simple fixes to excessive phone usage include:

Side Note: Unless they have access to technologies such as mobile phones, tablets, or video games, children become bored rapidly. My spouse and I have started detoxifying our children, teaching them how to develop new real-world skills, interests, and creative outlets.

Needs to be serviced or replaced

While most mobile phone hardware is built to withstand the rigors of regular usage, an overheated phone may indicate that it needs to be serviced.

The following are some of the most typical causes of a heated phone:

The best approach is to take your phone to a repair shop and have it inspected by an expert technician for internal physical damage. Notify them of any recent damage or heat source exposure.

Let’s say the technician can’t identify any hardware issues, but the gadget still generates a lot of heat. If that’s the case, it’s probably time for an update. Components that are becoming older are unable to keep up with today’s programs and user multitasking.

The typical smartphone has a three-year lifespan. If your budget permits, replace your phone as soon as possible.

The “how to stop my phone from overheating” is a question that many people have asked themselves. The answer is simple: turn off your phone and let it cool down.

How do I stop my phone from overheating so fast?

A: It sounds like the phone is heating up too quickly, and this can be caused by a number of different things including faulty hardware or software. The quickest fix for overheating issues in general is to lower your screen brightness.

How can I cool down my phone instantly?

A: You can use a wet towel, cloth or other materials to cool down your phone. Air is also another good option for cooling off the device.

Can a bad battery cause a phone to overheat?

How to Install and Activate Crackle on Roku